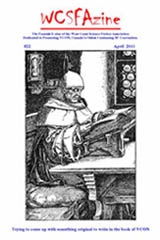 WCSFAzine was a science fiction fanzine by R. Graeme Cameron.

Photographs were contributed by Debbie Miyashita.

The cover of WCSFAzine was frequently a reprinting of a Canadian fanzine of years past, such as Canadian Fandom or Genre Plat. Also included have been reprints of articles by Leslie Croutch, Ned McKeown, and artwork by Albert Betts, all from Canadian Fandom, and by Ed Hutchings and Tom Waddell from BCSFAzine.

WCSFAzine won the Aurora Award for Best Fanzine for the year 2010.

R. Graeme Cameron had previously published BCSFAzine from 1989 to 1995, and also published his personal zine Space Cadet. As of 2010, he has been publishing The Fanatical Fanactivist.