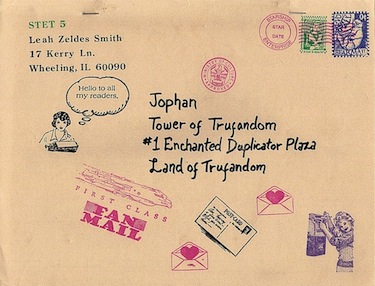 Stet was a science fiction fanzine by Leah Zeldes Smith and Dick Smith.

Stet was published in the 1990s in Wheeling, Illinois, U.S.A. The title is Latin for 'let it stand' and refers to the proofreaders term that is used to indicate that text that was marked for deletion should be retained. The first issue appeared in November 1990, with the next three issues following in 1991, and three more in 1992. After a long pause, issue 9 was released in 1999.

Issue 9 was subtitled The Old Fan's Almanac and was a parody of The Farmer's Almanac, and included the reintroduction of the advertisements in verse for the department store "Widowers", first seen in Harry Turner and Eric Needham's 1950s fanzine, Now & Then.

Dick Smith and Leah Zeldes Smith went on to publish the fanthology Contact! in 2001.