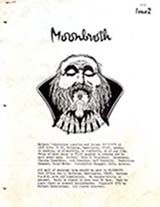 Moonbroth was a horror fiction literary zine edited by Dale Donaldson and published by Malvern Enterprises.

Moonbroth was first published in 1971 in Bellevue, Washington, U.S.A. The Secretary for the magazine was Claudia Donaldson, the Production Manager was Oscar White, and the Art Director was Jeff Burchill. The last issue, #30, appeared in 1977, was published by his wife, Jane Donaldson, with Bill Breiding and Sutton Breiding, soon after his tragic death in January 1977.

Artwork was by Jeff Burchill and J. Davis.

An interview with Dale Donaldson was featured in second issue of the horror fanzine Spoor.

The Dale Donaldson Memorial Award was created in his honor.