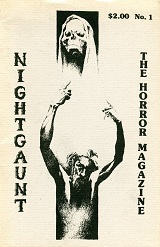 The first issue was released in Spring 1982. It contained fiction, nonfiction, and poetry.

Cover art was by D.W. Miller. Interior illustrations were by Scott Donohue and Barry Knight.