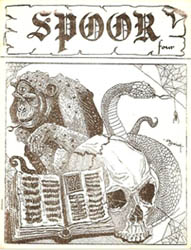 Spoor was a literary zine devoted to horror and weird fiction published by Fred C. Adams.

The first issue of Spoor appeared in 1974, and was published in Pennsylvania, U.S.A. It featured an extensive directory of fanzines devoted to horror fiction, and the story "Wander" by Jessica Amanda Salmonson (The Literary Magazine of Fantasy and Terror).

Issue two featured additions to the directory, as well as an interview with Dale Donaldson, editor of Moonbroth.

Fred Adams is also known as a writer of Cthulhu Mythos stories, which were published in a number of fanzines, including Space and Time.