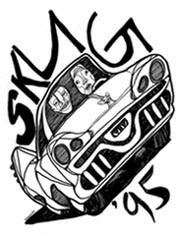 Skug is a science fiction and fantasy fanzine by Gary S. Mattingly.

Skug was first released in the 1990s and was published into the 2000s.