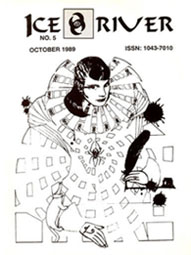 Ice River was a literary science fiction and fantasy zine edited by David Memmott and published by Wordcraft in Oregon, U.S.A.

David Mammott writes in the 2010 issue of Phantom Drift, "...in the summer of 1987, Ice River Magazine... was launched to explore, for lack of a better description, a literature of the fantastic. A literature of curious cross-fertilizations. A literature of intersections between literary writing and fantastic themes. A literature of satirical and techo-altered landscapes. Literary science fiction. Modern fantasy. Magic realism. Surrealism. And fabulist tales of inner worlds outside of time."

Cover artwork was by Bucky Montgomery (#6). among others.