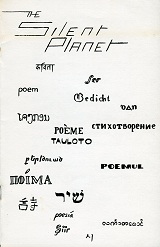 The Silent Planet was a poemzine edited by Mike O'Dell, Mark Rich, and Tobin Nellhaus, and published by Wyrd Publications from Aurora, Colorado, U.S.A.

The first issue appeared in October 1973.

Mark Rich also co-published Treaders of Starlight, with Rebecca S. Marcus, during the 1970s. In the 1980s he co-founded The Magazine of Speculative Poetry with Roger Dutcher.