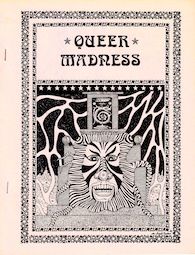 Queer Madness is a zine by Wilum Pugmire.

Queer Madness was released in the 1980s. The cover dates are given as the 1700s, such as the date 1780 given for issue 2. The first issue of Queer Madness was included in the 31st mailing of the APA Esoteric Order of Dagon, the Amateur Press Association devoted to H. P. Lovecraft; issue two was released for the Hallowe'en mailing of the Esoteric Order of Dagon, and issue three, from 1981, was included in the 33rd mailing.

Wilum Pugmire also published the fanzines Midnight Fantasies and Old Bones in the 1970s and Punk Lust in the 1980s. In the 2000s, he released the titles Idiot Chaos and Lovecraftian Euphoria for the Esoteric Order of Dagon.