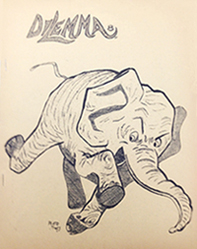 Dilemma was a science fiction fanzine by Jackie Franke.

Published in Beecher, Illinois, U.S.A., beginning in the early 1970s, at least 14 issues were released.

Contributors of art work included Plato Jones, among others.

Contributors of writing included Buck Coulson (Yandro), and Mae Strelkov, among others.

Eric Meyers recalls this fanzine in E-Ditto #1 from January 2011; "DILEMMA was the simplest of zines. Editor and sole contributor Jackie Caugrove chatted about her life and tossed in a few of her own hand stenciled illos. There were letters from readers. And that was it. I was enthralled."

In Rune #38, from 1974, Chuck Holst writes, "This is the first DILEMMA I have seen, but it appears to be a personalzine on its way to becoming a genzine. Jackie tells how the Tucker Fund came into existence. Mae Strelkov has an autobiographical essay, and Buck Coulson gives a two-page report on Minicon. The handout stencils are marvelous."

Immediately after Dilemma, Jackie Franke went on to publish the title Resolution from 1977 till 1980.