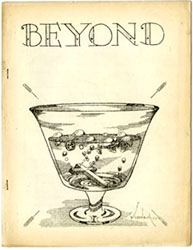 Beyond was a science fiction fanzine published by Rosco E. Wright in the U.S.A.

Appearing in the 1940s, at least six issues of this title appeared. Beyond contained essays, original fiction, fanzine reviews and art work. It was a mimeographed publication distributed by FAPA.

The first issue appeared in December 1943, with issue two following in March 1944.

Issue three, in September, 1944, featured a cover by Jack Wiedenbeck (Nova). Contents included fiction, an editorial essay, an article, a poem titled "In Moonlight", illustrated by Rosco Wright, as well as a biographical sketch and portrait of artist Hannes Bok. Also included was a piece entitled "Spawn of the Gods" that Wright referred to on the contents page as 'Martiana'.

Numbers four and five were released in January and July, 1945, and issue six came out in March, 1946.

Included are lino cuts by Rosco Wright. Wright was well known for his contributions of artwork to fanzines and was also the Staff Artist for Vernon McCain's Wastebasket.

Wright also published two issues of Vision in 1943, and in the late 1940s began co-editing Eusifanso with D.R. Fraser, Alice Rutherford, Clarence Rutherford, and Ed Zimmerman, for the Eugene Science Fantasy Artisan Society, till 1952. He then co-edited Viewpoints with Norman Hartman.

Rosco Wright's writing also appeared in the April 1943 issue of Astounding, and later both his writing and illustration would appear in the magazine Worlds of If in 1967.