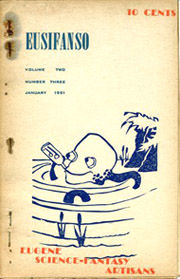 Eusifanso was a science fiction fanzine published by Little Press.

Eusifanso was an abbreviation for Eugene Science Fantasy Artisans Society, from Eugene, Oregon, U.S.A., and this was its official organ. Eleven issues of this fanzine were released in the late 1940s and early 1950s, the last issue appearing February 1952 with Volume 2 No. 5, with a changing roster of editors.

Slant, in their "Due Credit" section, acknowledges their work- "TO D. R. FRASER for making such a beautiful job of EUSIFANSO".

Eusifanso was succeeded by Viewpoints, by Rosco Wright and Norman Hartman, the stated goal being to publish ESFS club minutes and utilize leftovers from Eusifanso.

Rosco Wright had previously published the fanzine Beyond from 1943 till 1946.