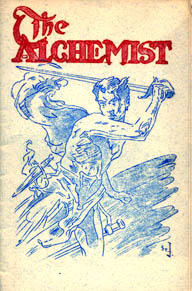 Seven issues of The Alchemist were released, the first in February 1940 and the last in the Winter of 1947. It was a mimeographed fanzine containing articles, stories, and poetry of a fantasy bent. The editors were all founding members of the Colorado Fantasy Society.

Also included in the February 1941 issue is "A Visit with Margaret Brundage" by Forrest Ackerman (Voice of the Imagi-Nation, Novacious); Margaret Brundage was the illustrator of many Weird Tales magazine covers.