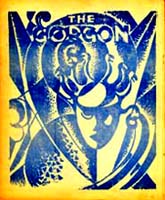 The Gorgon was a science fiction and fantasy fanzine by Stanley Mullen.

The first issue of The Gorgon was released in January 1947 in Denver, Colorado, U.S.A. Five issues were published that year, in March, May, July, September and November. The first few issues were hectographed but starting with the 7th issue The Gorgon was printed.

Contributors to Volume 1, #3, from July 1947, include George B. Adams, Landell Bartlett, Nowell Chase, Stanley Mullen, Phil Rasch, and Ben Singer (The Mutant), with illustrations by Charles Ragland Bunnell and Roy Hunt (The Alchemist).

In May 1949 The Gorgon ceased publishing with the 11th issue. Editor Stanley Mullen went on to write for professional SF magazines throughout the 1950s.