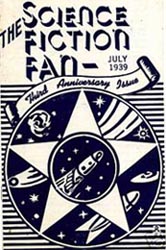 The Science Fiction Fan was a fanzine published by Olon F. Wiggins.

The first issue was released in July 1936. More than 55 issues of this title were published in Denver, Colorado, U.S.A., before the last issue, #55, appeared in February 1941. The Associate Editor was P.J. Searles. Contributing Editors were Hayward S. Kirby and Donald Wollheim.

Included was an article on Stanton Coblentz (Wings), an interview with Jack Williamson, and the article "The Last of Lovecraft" by John B. Michel (Terrible Tales of Tittering Terror, The International Observer).