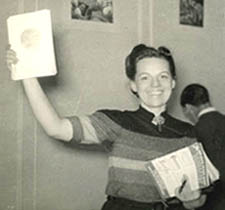 Pubbing her ish: Myrtle R. Douglas with a new issue of Voice of the Imagi-Nation 1940

Myrtle's nickname, 'Morojo", is Esperanto for the first three initials of her name. According to the Fancyclopedia, it is pronounced "Moroyo". Myrtle Douglas was an Esperanto enthusiast, known as the "world language", and met Forrest J Ackerman at one of the meetings for fellow Esperanto speakers. In Esperanto, Forrest J Ackerman became 'Fojak'. Myrtle's son, Virgil Douglas Smith, became Vodoso, and Myrtle's niece Patti Gray became Pogo, both also science fiction fans and, in Pogo's case, also the editor of the fanzine STF-ETTE. Friends such as Arthur Louis Joquel II became Alojo, and T. Bruce Yerke was Tobojo.

Also in 1939 she and Ackerman attended the first World Science Fiction Convention for which she designed and created futuristic costumes for the pair to wear, becoming the first costumed attendees at a convention. She created the fanzine Stephan the STFan especially for the convention.

Myrtle Douglas was a member of the Los Angeles Science Fantasy Society, and frequently helped publish the fanzines of other editors, such as Milton Rothman, along with her own.

After her death, Elmer Perdue created the fanzine Myrtle Rebecca Douglas An Appreciation in her honor, which included "I Remember Morojo" by Forrest J Ackerman.