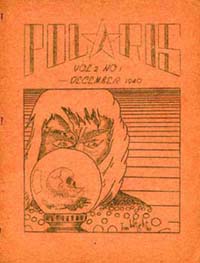 Six issues were published of this zine between the years 1939 and 1941. It was devoted to "weird" fiction and stories.

The fourth issue, published in September of 1940, included "The Tree on the Hill" by Duane Rimel, which had been revised by H. P. Lovecraft in 1934, and this was the first publication of it. It is now considered an essential work in the creation of the Cthulhu Mythos. Rimel was a correspondent of Lovecraft's from 1934 till '37. He was also one of the co-editors of The Acolyte.

During 1941, Polaris was a split zine with Shangri L'Affaires.