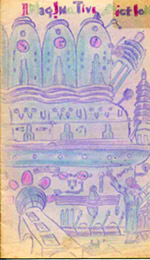 In his introduction to The Best of Fandom 1958, Robert Madle writes, "Through Fantasy Magazine I discovered two other fan magazines: Charles D. Hornig’s memorable effort to create a publication just for the Weird Tales fans, The Fantasy Fan, and the official organ of the International Scientific Association, The International Observer. Following this came Wm. Crawford’s attempts to publish the fan’s dreamzines, Marvel Tales and Unusual Stories. By this time I had the bug myself and, along with three other Philadelphia youngsters, started on a carbon-copied fan mag called The Science Fiction Fan. This lasted one issue and we then published several carbon-copied issues of Imaginative Fiction. (“We” were Jack Agnew, John V. Baltadonis, Harvey Greenblatt and, of course, myself. All are still around with the exception of Harvey, who was killed in World War II.) During the following years many other publications rolled off our hektographs and mimeos. We were, indeed, fanzine fans!"