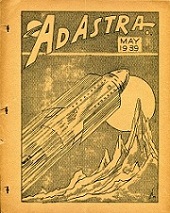 Ad Astra was a science fiction fanzine published in the United States by Richard Meyer and Mark Reinsberg.

It ran five issues from May 1939 to November 1940. Two pages of the unfinished sixth issue appeared later in the fanzine Midwest Marky.

Julian S. Krupa was the art editor, and provided the cover art for four of the five issues, and some interior artwork.

Mark Reinsberg was the chair of the 2nd World Science Fiction Convention in Chicago, known as Chicon 1, with Erle Korshak serving as secretary and Bob Tucker as treasurer.

Later in the 1940s Mark Reinsberg and Erle Korshak went on to found Shasta Publishers with T.E. Dikty.