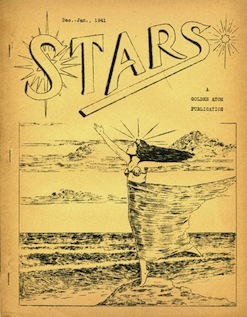 Stars was a science fiction fanzine edited by Larry Farsace ( Born Litterio B. Farsaci in 1921, died 2013).

Stars was published as a "Golden Atom Publication", coming from Rochester, New York, U.S.A. Farsace intended it as a supplement to his primary fanzine The Golden Atom. The second issue appeared in December 1940 - January 1941 and was 14 pages.