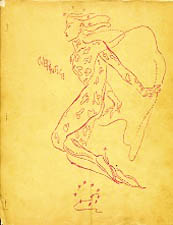 Nepenthe was a fantasy poetry fanzine (poemzine) by Earl Singleton.

Nepenthe was published at the M.I.T. Graduate House, Cambridge, Massachusetts, U.S.A. The first issue of Nepenthe appeared in December 1940. The title page carries a dedication that reads:

This
the first issue of Nepenthe
is for Trudy--
who
if we are not mistaken
was at the Chicon.


"Trudy" is, in all probability, Gertrude Kuslan, co-editor of The Nucleus, since it was noted at the time that she and Earl Singleton were romantically involved, and she attended Chicon.

The cover art was by Marie Johnson and illustrations were by Grady L. McMurtry.

The cover art for the second issue was by Leslie Perri (Doris Baumgardt), and was silkscreened by John B. Michel.

After seeing the second issue, A. Merritt wrote to Roy V. Hunt (The Gorgon) that "If Singleton can only keep it up, he's got something." Though Singleton writes in issue #2 that "the next issue of Nepenthe will be for Summer, 1941, and will appear in June," no further issues were published.

Earl Singleton was also co-editor of FanFare, with Art Widner.

In his article "The Stranger Club", for the January 1987 Noreascon Three Progress Report, Singleton's co-editor on FanFare, Art Widner, writes, "Like a comet, Henry Peter Earl Singleton dazzled fandom for less than a year, then abruptly was gone. Besides improving and strengthening the literate side of Fanfare, he brought out his own zine, Nepenthe, a fine collection of fantasy poetry that is still a landmark in that area. He attended Chicon I with me in 1940 and staged a whirlwind romance with Trudy Kuslan, one of the very few female fen of that time. Perhaps her head was quite turned because he was so unlike the "typical" fan. Even taller and handsomer than his fellow Texan, Dale Hart (who was also a great hand with the ladies), he was the envy of the rest of us wimpy pimply adolescents."

After graduating from M.I.T., Henry Earl Singleton, Sc.D. invented the gyroscope, which is used in airplanes, spaceships and missiles to keep them oriented. During the war, he had invented a method for degaussing submarines, which allowed American submarines to go by German submarines without being detected.