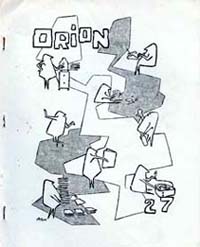 Orion was a science fiction fanzine published in the 1950s in the UK.

Contributors during this period of publishing included Walt Willis (Hyphen).

He then gave over the editorship to Ella Parker, who continued to publish it under the same name for several more years. In her first year of editorship she entered the Skyrack Readers Fan Poll as the third favourite fanzine in Britain.

Orion won the Skyrack Readers Fan Poll for Best British Fanzine for the year 1960. In 1961, it came in second, beaten by another of Parker's publications, The ATom Anthology.

Ella Parker ceased publication of Orion in 1962, after 29 issues had been published. The same year she again won the Skyrack Readers Fan Poll, this time for Fan Personality of the Year, and her report of her trip to the U.S.A., Parker's Peregrinations, was voted one of the Top Ten British Fan Publications. She continued publishing fanzines, releasing Compact for the Offtrails Magazine Publishers Association.