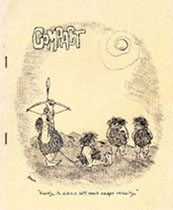 Compact was a science fiction fanzine by Ella Parker.

Compact was published in the UK for the Offtrails Magazine Publishers Association. Four issues were released; the first in March 1963, the second in June, followed by the third in December of the same year. The fourth and final issue appeared in June 1964.

Covers and interior illustrations were contributed by Arthur Thomson.

Ella Parker had previously published 29 issues of the fanzine Orion, as well as a collection of the art work of Arthur Thomson entitled The ATom Anthology, and her report on her trip to the U.S.A., Parker's Peregrinations, all three appearing in the list of the Skyrack Reader's Poll of the Top Ten British Fan Publications in their respective years of publication. As well, she was one of the many ever-changing co-editors of Vector.