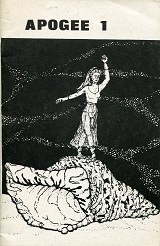 Apogee was published in Baltimore, Maryland, U.S.A. and was subtitled, "an illustrated anthology of poetry of the imagination". The first and only issue was released in 1981.

Cover art was by Kathleen Taylor, who also provided interior illustrations, along with Doug W. Hiser Jr. and Medcalf.