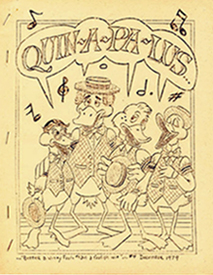 Quinapalus was a science fiction fanzine by Mark K. Digre.

Quinapalus is a word used, according to bibliomania, "if any one quotes from an hypothetical author, he gives Quinapalus as his authority."

In Checkpoint #94, of February/March 1979, Peter Roberts called it a "...promising fannish fanzine". Paul Vincent, in TAFFluvia 5 of April 1986, calls it a; "Fine Mipple-stipple fannish genzine with strong outside material plus hand-stencilled art by the usual crowd of talented locals."

Contributions of writing included Joyce Scrivner's DUFF (Down Under Fan Fund) report, and "Time Travel for Fun and Profit" by Paul Skelton (Small Friendly Dog), among others.