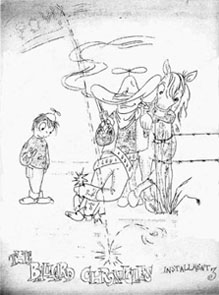 The Ballard Chronicles was a science fiction fanzine by Lee Jacobs published in the U.S.A.

Created for the APA Spectator Amateur Press Society, The Ballard Chronicles was fan fiction, a series of pulp magazine style adventure stories starring a fictionalized version of science fiction fan Wrai Ballard. Wrai Ballard, at the time, was the official editor of SAPS.

There are many thinly disguised fans who appear as characters in the stories, including F.M. Busby as "Bug Daddy Effem Busby", Earl Kemp as "Killer Kemp", Eva Firestone as "L'il Eva", Bruce Pelz as "Peco Pelz", and Bjo Trimble as "Bjo".

The Ballard Chronicles were series of installments, however each story was a complete marrative unto itself. Illustrations were by Bjo Trimble (Shangri L'Affaires), among others.

The third installment was a western entitled "The Musquite Kid Rides Again", included in the 51st SAPS mailing of April 1960.

The third installment was made into a movie by fans in the LASFS (Los Angeles Science Fantasy Society) called The Musquite Kid Rides Again, and starring science fiction fans and fanzine editors.