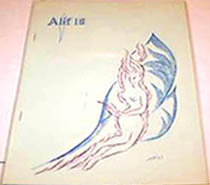 Alif was a science fiction fanzine by Karen Anderson.

Alif was published first in Berkeley, California. U.S.A., and later in Orinda, California, and was distributed by the Fantasy Amateur Press Association.

Alif was first released in the late 1950s. Issue 2 came out in 1957. Issue 12 was released in 1961 and featured contributions of verse such as Kinnison's Band, and other writing by Poul Anderson, and a two page cartoon by Bjo Trimble (Shangri L'Affaires, Melange). Issue 15 featured a 'Piebald Hippgriff' on the cover. Alif #20 was released with the 107 FAPA mailing in 1964.

Karen Anderson also published the fanzines Goliard, the 1958 one shot Henry Kuttner - A Memorial Symposium, Vorpal Glass, and The Zed.