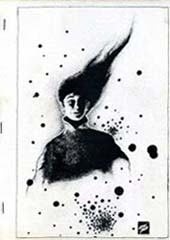 Niekas is a fanzine that spans fantasy and science fiction interests with a basis in Tolkein, edited by Ed Mesky.

Niekas was begun in 1962 as an apazine, before becoming generally available, and published in New Hampshire, U.S.A. Ed Meskys wrote about the zine, "I started a separate mailing-comments zine for the APA, and changed its name to NIEKAS and started the numbering over again with the June 1962 issue.... Since there was no Tolkien fanzine being published I decided to devote NIEKAS to Tolkien and try to run at least one Tolkien related piece in each issue." The word 'Neikas' is Lithuanian for nothing or nobody.

Felice Rolfe joined as co-editor and the two editors won the Hugo Award for Best Fanzine in 1967. Later on Rolfe left and in the 1990s Ed Meskys was Editor-In-Chief, with Anne Braude the Associate Editor, Todd Frazier the Assistant Editor, and Jim Reynolds as Art Director, and Production.

Featured were interviews with Darrell Schweitzer, among others. Also featured was artist Hannes Bok, with reprints of his art work and articles on him by Avram Davidson, Grania Davidson, Jack Gaughan, and Emil Pataja.