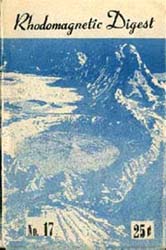 The first six issues of Rhodomagnetic Digest were edited by George T. Blumenson and published between 1949 and 1950, constituted Volume 1. Six consecutive issues, Volume 2, were edited by Don Fabun and Donald Baker Moore, and Volume 3 was edited by Don Fabun. The editorial staff was Gladys Fabun, George Finigan, William Nolan and Maggy Garrison. It was published by the Elves' Gnomes' and Little Men's Science Fiction, Chowder and Marching Society. They described themselves as "A Society Dedicated to the Purpose of: bringing together people with an interest in Science-Fiction and Fantasy for mutual enjoyment and enlightenment. The entire run of the fanzine was from 1949 till 1951. The title was revived for three issues in 1962 by Al HaLevy.