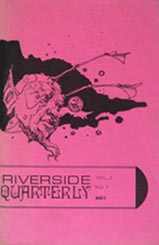 The genesis of Riverside Quarterly began in 1953 with Inside, started by Ron Smith which was merged in 1954 with Science Fiction Advertiser (1952-1953, which had begun as Fantasy Advertiser published from April 1946 to November 1951), and was renamed Inside and Science Fiction Advertiser. It was published under this title for 3 years, during which it won the Hugo Award for Best Fanzine. It then ran a further year as Inside Science Fiction. It ceased publication for 4 years and was then revived for 3 issues as Inside with editor Jon White and Ron Smith as Assistant Editor. The last issue appeared as Inside-Riverside Quarterly,the transition between Inside with White as editor and new editor Leland Sapiro, who would rename the zine Riverside Quarterly. The first issue appeared in August 1964.

To further complicate matters, Sapiro moved to Saskatoon, Saskatchewan in Canada and then Regina, Alberta, Canada in the 1970s, then Florida, U.S.A. in 1975, Texas, in the 1980s, and Louisiana, in the 1990s. The last issue appeared in August 1993.

Skyrack called it, "A well produced, balanced and literary sf fanzine...Good stuff all through."