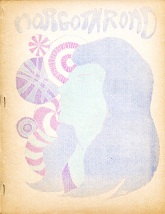 Rick Brooks is a distant midwestern cousin to Ned Brooks, editor of It Goes On The Shelf.