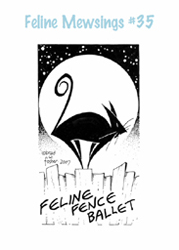 Feline Mewsings is a perzine by R-Laurraine Tutihasi, published in Oracle, Arizona, U.S.A.

Feline Mewsings is mainly distributed within the science fiction fanzine community through the Fantasy Amateur Press Association, and appears quarterly. The first issue appeared in May 2000. The most recent issue, #46, was released November 2011.

Contributions of writing include a column by Amy Harlib, called "Amy's Motley Musings", and a column by Jonathan Vos Post, called "Jonathan's Science Corner", along with the editor's own writings.

Contributions of photography are by Mike Weasner.