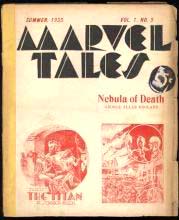 Marvel Tales was a literary fanzine devoted to science fiction and fantasy writing published in the 1930s by William Crawford.

William Crawford lived in Everett, Pennsylvania, U.S.A., where he owned his own letterpress and would print his fanzines one page at a time. Marvel Tales were issued with coloured covers and on varying coloured paper stock. The first issue was 40 stapled pages.

Most notably, Marvel Tales was the publisher of several H. P. Lovecraft stories, beginning with the very first issue, which appeared in May 1934. As well, William Crawford was the sole publisher of the only book of Lovecraft's work to appear in his lifetime, The Shadow Over Innsmouth.

Crawford's editorial decisions shaped the future of science fiction and weird fantasy fiction by championing writers whose work was not yet acceptable to the mainstream, something that was only possible to do in a fanzine.