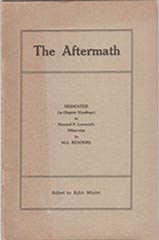 The Aftermath is an amateur press publication by Edith Miniter.

The Aftermath first appeared in Roxbury, Massachusetts in 1907, edited by Edith Miniter and Helen M. Small. A later edition appeared in Worcester, Massachusetts, U.S.A. in November 1921. It recounts the events of the Boston National Amateur Convention for the Amateur Press and the talk that H. P. Lovecraft gave at this event. This issue of The Aftermath is dedicated to him in specific, in chapter headings, as well as "to all readers".

Lovecraft later returned the favour and over a period of years wrote eight poems for her, including Theobaldian Hibernation, and one for her cat, called To Tat (Edith Miniter's Cat), and a tribute to Edith Miniter on her passing in 1934. Prior to her death, she had the occasion to tell him of several superstitions during a trip he took to visit her, such as the "whippoorwill" myth which appears in The Dunwich Horror. Lovecraft writes, "Mrs. Miniter supplied many legends and particulars which no guidebook could furnish - it was on this occasion (1923) that I first heard of the rustic superstition which asserts that window-panes slowly absorb and retain the likeness of those who habitually sit by them, year after year."

Hippocampus Press released a collection of Edith Miniter's writings in 1920. She wrote gothic short fiction, essays, articles, poetry, and a humourous parody of Lovecraft called "Falco Ossifracus", under the name "Mr. Goodguile", which Lovecraft enjoyed. It appeared in another of Mrs. Miniter's publications, The Muffin Man.

Edith Miniter was one of the presidents of the National Amateur Press Association, and the Boston based Hub Amateur Journalists Club. She published a number of periodicals, including The Amateur, and contributed to many others, including The Vagrant.