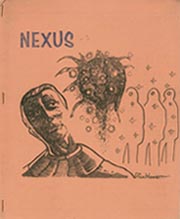 Nexus was a science fiction fanzine by Peter Weston.

Nexus was first published in Birmingham, in the UK, in June 1964. It was a "PADS" distributed fanzine and was included in the first mailing.

The second issue of December 1964, featuring a cover by Dick Howett, was also distributed as a PADS fanzine but was also included with the mailing of the Offtrails Magazine Publishers Association. The subsequent issues would all be distributed through OMPA.

The 6th and last issue appeared in October 1966.