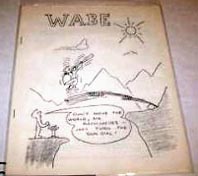 Wabe was first published in July 2000, in Madison, Wisconsin, U.S.A. At least six issues of this title have appeared in the 2000's.

Wabe won the FAAn Award for Best Fanzine in 2002.