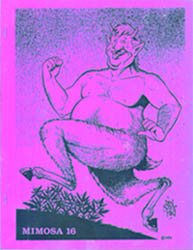 Mimosa was a science fiction fanzine that ran from 1982 until 2003. It was edited by Richard and Nicki Lynch. It's focus was on the history of science fiction fandom and fanzines and was highly popular for its entire run. It won the Hugo Award for Best Fanzine six times and was nominated fourteen years in a row.

Issues 1-16 were produced via mimeograph, while issues 17-30 were printed commercially. Issues 28 and 29 were a two-volume "Mimosa Fanthology" collection, which featured some of the best articles from the first 27 issues.

Some issues were distributed through the Southern Fandom Press Alliance APA.