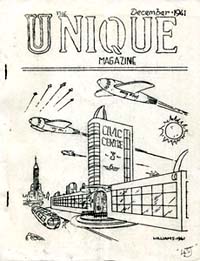 Unique was a science fiction fanzine by Arthur Williams published in London, England.

Williams had previously published The Science Fantasy Fan in early 1941, but had fell ill and needed to abandon his publication while in the hospital. Upon his recovery, he resumed publishing later in the year with the new title, Unique.

Issue one, from October 1941, included contributions by Paul Dennis Lavond, Robert Lowndes, and Duane W. Rimel (The Acolyte), with cover and interior art by Williams.

Williams was a well regarded fan artist whose work had appeared in Futurian War Digest and Zenith, and each issue of Unigue featured his art.

Four issues of Unique appeared in the 1940s, with the fifth issue retitled as Trends.