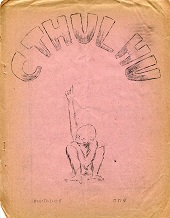 Cthuhlu was a science fiction, fantasy, and weird literature fanzine edited and published by Douglas R. Webster in Aberdeen, Scotland.

Cthulhu ran only one issue, published in Summer 1942.

Webster's Cthulhu holds the distinction of being the first publication to have H. P. Lovecraft's "Cthulhu" in its title.

Webster published fewer than 40 copies of Cthuthu #1, one copy each for a "limited clientele" of his choosing (recipients listed in full on page one).

Douglas Webster had previously edited The Fantast, after founder C.S. Youd went into the armed services, and published it from 1941 till 1942.