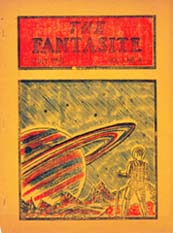 The Fantasite was a science fiction fanzine by Phil Bronson, published as the "Official Organ of the Minneapolis Fantasy Society".

The first issue ofThe Fantasite was published in 1940 in Minneapolis, Minnesota, U.S.A. until the editor moved to California in 1942. Twelve issues of The Fantasite were released, the last issue appearing in February 1944.

Phil Bronson also published Scienti-Comics and was editor of Shangri L'Affaires for the year 1943.