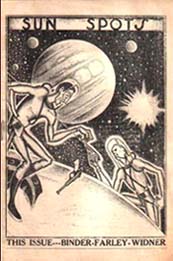 29 issues of Sun Spots appeared, starting in 1939, and running until September 1947. It began as a mimeographed publication, but soon was printed.

Sun Spots also featured the results of the 'Beowulf Poll', in which fans ranked the works of weird fiction and science fiction writers which was conducted through Gerry de la Ree's other publication Beowulf.