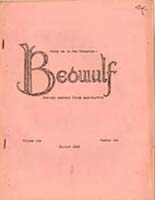 Beowulf was first released in 1945 and distributed as a Fantasy Amateur Press Association publication. The second issue is dated Winter 1945.

Beowulf was perhaps best known for "The Beowulf Poll", which asked of science fiction fans who their favorite authors, books and stories were. The results were published in the zine, as well as in another of Gerry de la Ree's titles, Sun Spots.