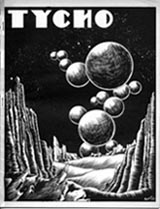 Tycho was a science fiction fanzine by John L. Gergen.

John Gergen was a science fiction fan in the late 1930s and the 1940s who was a member of the Minneapolis Fantasy Society. Tycho was published in Minneapolis, Minnesota, U.S.A.

Two issues of Tycho appeared, the first in June 1942. The cover was by Morris Scott Dollens (Science-Fiction Collector) with a frontspiece by Sherman Schultz. Contributors of writing were George Dickson, Art Osterlund, A. L. Schwartz, Sherman Schultz, and John Gergen.

The second issue appeared in November 1942, with a cover by Morris Dollens, and frontspiece by Sherman Schultz, and writing by Sheldon Araas, Redd Boggs (Sky Hook), Donn Brazier (Frontier), John B. Michel (writing as Bowen Conway) (The International Observer of Science and Science Fiction), S.A. McElfresh, and John Gergen.

John Gergen did art work for a number of fanzines, including Spaceways.

As well, he collaborated with Poul Anderson on the science fiction short story "The Entity", which appeared in the June 1949 issue of Astounding Science Fiction. It was the fifth story ever published by Anderson, and the only story of Gergen's to be published in a prozine.