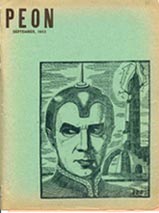 Peon was a long-running fanzine of the late 1940s and into the 1950s. Thirty eight issues were released, the last issue, #38, in 1957. The fanzine was published even while Riddle was on active duty in the U.S. Navy. The fanzine featured an editorial by Riddle, articles, fiction, poetry, and regular columns.

Poetry was by Art Rapp, and Rick Sneary (Moonshine).