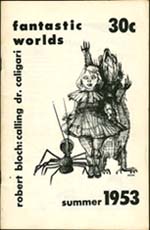 The first issue of Fantastic Worlds appeared in Summer 1952 and was edited by Edward W. Ludwig and Sam Sackett, as was the Fall 1952 issue. After this the next six issues were edited by Sackett with Associate editor Stewart Kemble. It included articles, fiction, poetry, photographs, and illustrations. Eight issues were released, the final issue appearing in Fall 1955.

Photographs were by Harry Altshuler, Scotty Welbourne, and from the collection of Forrest J Ackerman.