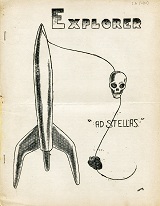 The Explorer was a science fiction fanzine published in the late 1940s and early 1950s by The International Science Fiction Correspondence Club (ISFCC).

The first issue was published in 1949.

Ed and Jo Noble were the editors until at least October 1952, after which Ray C. Higgs (The National Fantasy Fan, Arion, Fantasia) assumed the editorship.

In "The ISFCC Story", W. Paul Ganley recalls having received a letter from Richard Franz Abbott, in response to a letter of his published in the December 1948 issue of Thrilling Wonder Stories indicating that he was looking to create The American Science Fiction Correspondence Club. Ganley states that "this was the beginning of the ISFCC." Shortly thereafter, Abbott contacted Calvin T. Beck, who had recently organized The Science Fiction Trading Post, and suggested a merger of the two fledgling organizations. The proposed alliance failed, but, after much wrangling, the ISFCC finally emerged with a constitution (legalized in Ohio on April 7, 1949) and a clubzine. The Constitution stated that "the purpose of this charter club is for the exchange of ideas, thoughts, and methods on the science fiction world".

Prior the the publication of The Explorer, though, the ISFCC published its announcements and news in Martin R. Woomer's eclectic zine Allentown, Pennsylvania.

Larry Kiehlbauch was one of the early Presidents of the organization, until Lynn Hickman (TLMA, The Little Corpuscle) assumed the post at the end of 1951. By late 1953 Donald E. Gates was club President and Honey Wood (The National Fantasy Fan) was Vice-President. In 1954, K. Martin Carlson (The Kay-Mar Trader) became President.