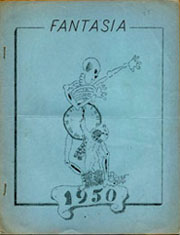 Fantasia was a science fiction fanzine by Ray C. Higgs.

At least two issues of Fantasia were published in Connersville, Indiana, U.S.A., in the early 1950s.

The first issue was released in 1950, and featured mainly fiction. The front cover art work was by Ray Higgs.

The second issue appeared in September 1951 featuring poetry by Claudette Scanlan and contained some fiction but was, for the most part, aimed at Nolacon for 1951. The cover art was by Gordon Rouze (Xenon).

Ray C. Higgs was also one of the co-editors of the long running The National Fantasy Fan during the late 1940s and early 1950s, and in the 1950s also published the fanzines Arion and The Explorer, and five issues of the title Sapian for SAPS.