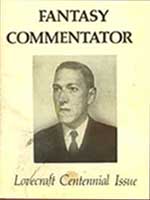 Fantasy Commentator, with the subtitle, "covering the field of imaginative literature" , was a letter sized, stapled zine first appearing in December 1943. Twenty eight issues were published between 1943 and 1953 in New York City, New York, U.S.A. Searles resumed publication of the zine in 1978 with issue #29 and published until the double-issue #57/58 in Summer 2004.

In its first incarnation from 1943 till 1953, it was a publication devoted to H. P. Lovecraft. In later issues there was a return to Lovecraft and his circle and, in the 1990s, Searles joined the Lovecraftian APA Esoteric Order of Dagon, and some issues of Fantasy Commentator were distributed in their mailouts.