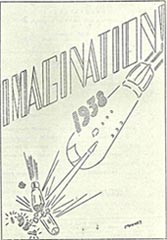 Imagination!, subtitled The Fanmag of the Future With a Future!, was a science fiction fanzine published by the Los Angeles Science Fiction Society in the 1930s and edited by Forrest J Ackerman, with Morojo (Myrtle R. Douglas) and T. Bruce Yerke.

Imagination! was first published in Los Angeles, California, U.S.A. in October 1937. Thirteen issues were released, and it ceased publication in October 1938.

Imagination! #4, the January issue, is noted for being the first fiction in print by Ray Bradbury, who was 17 at the time. His story, "Hollerbochen's Dilemma", was continued in the September issue, by which point he had turned 18. Not long after, he started his own fanzine, Futuria Fantasia, with $90.00 lent to him by Ackerman.