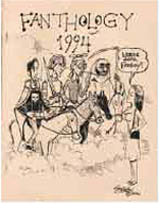 Fanthology 1994 is a science fiction anthology edited by Robert Lichtman.

Fanthology 1994 is an anthology of outstanding writing that appeared in fanzines released in 1994. It is a photocopied publication of 63 numbered pages, of which 200 copies were printed.

The cover is by Stu Shiffman.